How To Avoid Scams And Choose The Best Krill Oil Supplement

At Smarter Reviews, we employ a comprehensive evaluation system to analyze and measure the full value of products, by looking at the ingredients, safety, projected effectiveness, return policies, and overall customer satisfaction. This method is known as the Smarter Reviews Ranking System.

In addition to ranking products, we also collect research from the latest studies and clinical trials. Choosing the best product is easy with Smarter Reviews. We offer a clear-cut system that covers the most important criteria, and takes into account the experienced personal reviews of our valued Smarter Shoppers. We've taken the guesswork out of the process, so you can shop smart, and save on time and money.

Do I Really Need an Omega-3 Supplement?

The NHANES concluded that omega-3 fatty acids are deemed important and dietary supplementation—in addition to food sources—may need to be considered to achieve (omega-3) recommendation levels in the American population. 13

Omega-3 essential fatty acids are essential for a reason, and it's clear that supplementation may be needed to meet the daily amount our bodies use.
But how do we know which kind of omega-3 fatty acid supplement is best?

Smarter Reviews has spent months compiling extensive research of omega-3 products to help you choose the right supplement for your needs.

What are Omega-3 Essential Fatty Acids?

Omega-3 essential fatty acids are polyunsaturated fatty acids. Omega-3s are commonly found in fatty fish like salmon, small shellfish like krill, and in many vegetable oils. There are three main omega-3 EFAs: eicosapentaenoic acid (EPA), docosahexaenoic acid (DHA), and alpha-linolenic acid (ALA). ALA is the most common omega-3, and is found in vegetable oil, nuts, flax seeds, leafy vegetables, and some animal fats.*3 EPA and DHA are commonly found in fatty fish.3

Omega-3 essential fatty acids (EFAs) are found throughout our bodies—in fact, they help protect and insulate each and every one of our cells. Perhaps one of the reasons why omega-3 EFAs are so popular is because of the wide range of health benefits they have been shown to provide in hundreds of clinical studies throughout the years.

Additionally, according to the Harvard T.H. Chan School of Public Health, omega-3s "have been shown to help prevent heart disease and stroke, may help control lupus, eczema, and rheumatoid arthritis, and may play protective roles against cancer and other conditions."  3

Unfortunately, our bodies cannot produce omega-3 fatty acids. That's just one reason why it is imperative to obtain EFAs through the foods we eat, and through dietary supplementation.

Omega-3 EFAs are the most widely used supplements in the United States, and many companies are making omega supplements that are—unfortunately—not necessarily in the consumer's best interests.

Reading the label is one of the most important things you can do to prevent a bad experience when choosing the best omega-3 supplement. The lists below highlight certain things you should avoid and notable things you need to look for.

What is the Best Omega-3 Source?

When choosing the best omega-3 supplement, one of the main things you should look for is the source of omega-3. Fish oil has traditionally been a popular source for omega-3s, but due to the emergence of heavy metals in bodies of water, and overfishing in our oceans, krill oil has significantly grown in popularity.

Over the past year, many of our Smarter Shoppers have asked, "What omega-3 supplement should I take—krill oil or fish oil?"

We researched the answer and found several reasons why krill oil may be the superior choice.

***Safety Warning*** - A notable concern when deciding to choose between fish oil and krill oil is the rising contamination levels in our oceans.

The major concerns with these two contaminants are that they are persistent in our oceans, and they accumulate up the food chain. Basically, big fish eat little fish, and since big fish are higher up the food chain, the concentration levels of heavy metals (mercury and PCBs) has an increased chance of being dangerous to humans. 19-20

Since fish oil may be extracted from the tissues of fish that are higher up the food chain, it might be more contaminated. However, krill are at the very bottom of the food chain, their lifespans are shorter than fish, and since krill eat algae they are relatively free of dioxins and PCBs. 20

We tested 72 different omega-3 supplements, and based on our 5 pillars of excellence: ingredient safety, projective effectiveness, value, return policy, and customer satisfaction, we discovered the Top 5 Omega-3 Supplements of 2019. 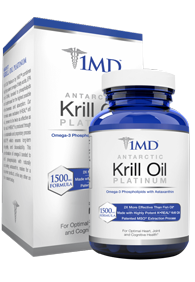 1MD's Antarctic Krill Oil Platinum is Smarter Review's number one choice. This superior omega-3 supplement uses a scientifically studied krill oil formula that contains 1500 mg of krill oil, and provides 270 mg of EPA and 180 mg of DHA—one of the best omega quantities and ratios we've seen. 1MD has done their homework and has brought us an outstanding krill oil formula with no synthetic fillers or artificial ingredients. 1MD stands by their products by offering a generous 90-day unconditional money-back guarantee.

1MD is endorsed by two board-certified doctors, and this is the only brand we found to work with top physicians. They also offer bundled discounts— click below to learn more about their specials.

Learn About Our Top Pick 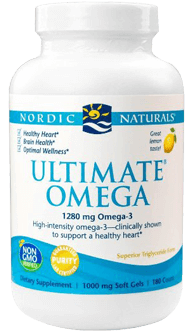 While Nordic Naturals does have a good reputation, reviews of this product were highly mixed with roughly 30% complaining about mild stomach aches and cramps.* Multiple reviewers bought bottles that contained capsules that were stuck together.* Many reviews indicated a pungent fish smell or aftertaste. Nordic Naturals offers a lower-end 30-day return policy with strict guidelines. Most importantly, this product is not derived from krill, and may not be as readily absorbed or effective. 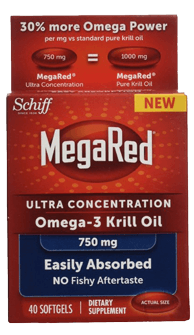 MegaRed by Schiff is a well-known and popular brand name. However, this product contains a significantly lower amount of krill oil than the others on this list. It also contains the artificial sweetener sorbitol. After thoroughly searching the website we cannot find any sort of money-back guarantee to be found. These setbacks bump it down our top list. 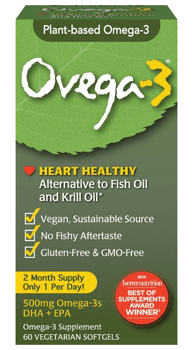 Ovega-3 is a plant-based omega-3 supplement that contains 320 mg of DHA and 130 mg of EPA omega-3 fatty acids. This product works well if you have any dietary allergies or restrictions (fish, shellfish, soy, milk, eggs, nuts, and wheat) because Ovega-3 is made from a vegetarian/vegan plant source. However, this product does contain caramel color and other additives you don't want. This product is not derived from krill and may not be as readily absorbed or effective because of its plant base. 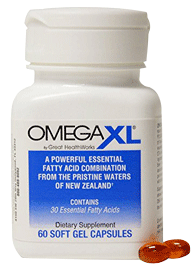 Omega XL is a mussel source omega product. It contains a 300 mg proprietary blend. The amounts of EPA and DHA in this product are not specified. We found the product only offers 40 mg of mussel oil, which is obviously low and not krill-based. We found many negative reviews about the product on Amazon. They offer a 90-day conditional money-back guarantee that does not include shipping. Ultimately, this was the bottom of our top five.

Back to the Smarter Choice